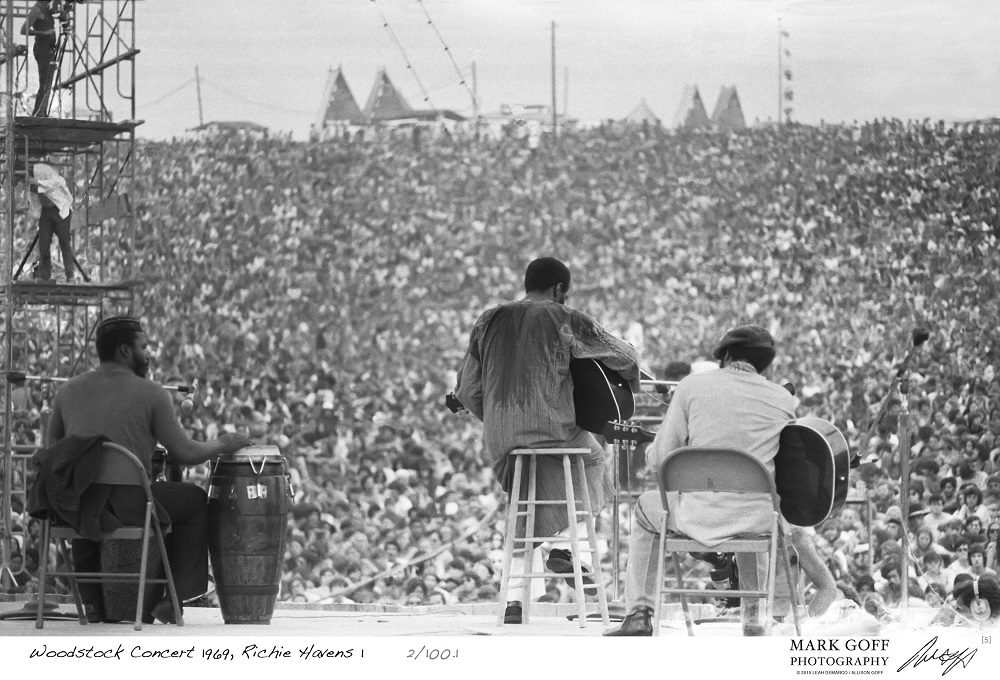 Richie Havens performing at the 1969 Woodstock Festival in Bethel, as photographed by the late Mark Goff (used by permission)

Hurleyville, NY – This August 3 and 4, the Sullivan County Historical Society will celebrate the 50th anniversary of Woodstock with two days of live “music of the 60’s” and an exhibition of newly discovered black-and-white photographs from the original Woodstock concert.

The collection of Woodstock photographs comes to the Museum courtesy of Divine Corners artist Nick Clemente, who unearthed them while researching a particular image he wanted to use for a graphic design project. The short version of this extraordinary story involves photojournalist Mark Goff, whose work was stored in an old cabinet in Milwaukee for 50 years. Goff covered the 1969 Woodstock concert for a Milwaukee alternative weekly.  He captured over 200 images of the performers and the crowd – everyone from Jerry Garcia to Joan Baez, Ravi Shankar, Roger Daltrey and Sly Stone.

A lifelong Milwaukeean, Goff enlisted in the Navy in 1965. He served in the USS Kitty Hawk's shipboard hospital during its 1967-1968 combat deployment, when the aircraft carrier set a record for consecutive days launching missions into Vietnam at the peak of the conflict. Upon leaving the military, Goff became a staple of Milwaukee life as photojournalist. His photographs are black and white, and they tell the story of the concert with extraordinary sensitivity and a unique perspective.

On Saturday, August 3, Little Sparrow, Greg Castro, and friends will perform songs of the Woodstock generation between 2 and 4 p.m., followed by a reception for the work of Mark Goff. Then from 4-7 p.m., at Gallery 222 (located down the street from the Museum, at 222 Main Street, Hurleyville), a second exhibition of Mark Goff's Woodstock photography will open. The public is cordially invited to both shows.

On Sunday, August 4, from 2-4 p.m., the Sullivan County Historical Society’s First Sunday Music and History program will celebrate the music of the Grateful Dead. The Grateful Dead is one of the most iconic bands to emerge from the sixties. They performed at Woodstock, and then in the ‘70s, Jerry Garcia returned to Sullivan County to perform a concert in Fallsburg!

Guitarist Fred Scholl and bassist Mike Manuele, who have performed the music of the Grateful Dead for over 30 years, will join Little Sparrow for an afternoon of live jamming! The photography exhibition will include a special selection of photos of the Grateful Dead from the 1969 concert. The collection will be on display throughout the month of August.

Join us to celebrate the anniversary of the world’s most famous concert! Both events are free and made possible with funds from the Decentralization Program, a regrant program of the New York State Council on the Arts with the support of Governor Andrew Cuomo and the New York State Legislature and administered by Delaware Valley Arts Alliance.

The Sullivan County Museum is located at 265 Main Street, Hurleyville. Call 845-434-8044 for more info, or visit the website at www.scnyhistory.org.