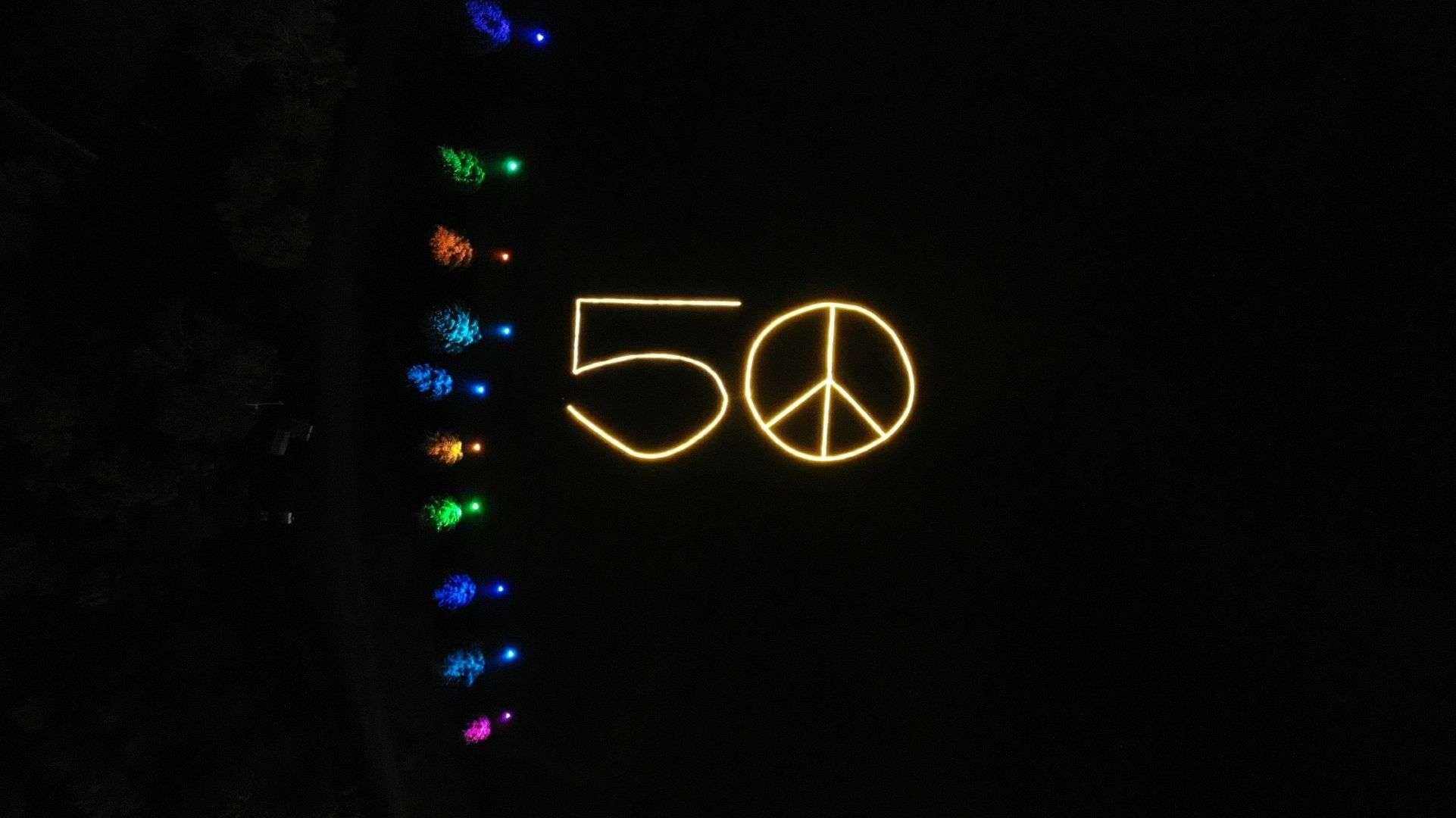 The 50th anniversary marker on the field of the original Woodstock festival in Bethels, as seen from overhead by a State Police drone.

Bethel, NY – Sullivan County welcomed an estimated 100,000 people to events and activities across the region this past weekend. Looming largest was the 50th anniversary of the famous Woodstock Music and Art Fair, a multi-venue celebration of the Bethel rock festival that impacted the nation and the world.

With other events like the Little World’s Fair in Grahamsville and Porchfest in Callicoon occurring simultaneously with the 50th anniversary in Bethel, Sullivan County and State and local partners opened the County’s Emergency Operations Center for the duration of the weekend. But other than a few arrests, power outages and medical calls, emergencies and traffic backups proved fewer in number than a typical summer weekend.

“Peace and love prevailed yet again in Sullivan County, 50 years after the example was set in Bethel,” said Sullivan County Public Safety Commissioner Rick Sauer. “That was a direct result of a team that had planned for this for more than a year – and the general public, who were here entirely to enjoy the fun and camaraderie.”

“The coordination between the local, State and Federal agencies during all phases of the planning was instrumental in the weekend being a complete success,” agreed Captain Christopher Zaba, who led the New York State Police contingent assigned to this weekend. “Our traffic plan was a success, and this was in part due to the public honoring our request to avoid unnecessary travel in the area of Bethel Woods. I’m pleased to have been part of the exciting and historic weekend in Sullivan County.”

“I want to thank everyone who spent this weekend working to ensure people had the best experience possible,” stated Legislature Chairman Luis Alvarez. “Together, we defined Sullivan County as a very special place in the minds of thousands, spreading good will and good cheer around the world. It doesn’t get any better than that!”

“Nothing can surpass those three extraordinary days in the summer of ’69, but we certainly came close in the summer of ’19,” observed District 1 Legislator Scott Samuelson, who lives in and represents the Town of Bethel. “I hope all who visited us experienced the best our residents and businesses offer, and I welcome them to return!”

“The Town of Bethel is grateful to all the agencies that participated in the planning of the Woodstock 50th Anniversary this past weekend and all year long,” said Bethel Town Supervisor Dan Sturm. “Their great work together allowed thousands of visitors from around the country and the world to see all we have to offer here in Bethel and Sullivan County – and we showed that we can have top-notch, well-attended events with hardly any disruption to our local community as well. Our hope, too, is that people return again and again.”

“The word from residents and visitors was that the experience was incredible,” affirmed Roberta Byron-Lockwood, president and CEO of the Sullivan Catskills Visitors Association (SCVA). “All were happy – and all were left with a fond memory for the next 50 years. We are delighted with the results of this historic event!”

In collaboration with Bethel Woods Center for the Arts and Sullivan County, the SCVA coordinated a dedicated bus run to the Woodstock monument at the corner of Hurd and West Shore roads, next to the site where half a million people gathered in August 1969. Dozens of visitors, many from outside the United States, enjoyed riding the Rolling V buses to and from the site, accompanied by local volunteer tour guides who shared memories, history and unique tales of Woodstock with passengers.

“After months of planning and preparation, it was incredibly rewarding to see the masses gather on these historic grounds in the name of peace, love and music once again. We maintained the best parts of the monumental event that happened 50 years ago: powerful musical performances, excited guests, the all-important sense of togetherness. With the support from state and local law enforcement, traffic pile-ups were a thing of the past. Though Anniversary Weekend has concluded, Bethel Woods is proud to continue this legacy of community and civility for years to come,” said Darlene Fedun, Chief Executive Officer of Bethel Woods Center for the Arts.

Elsewhere in Bethel, Hector’s welcomed all to the annual “Hippie Thanksgiving,” while original Woodstock performer Melanie entertained an affectionate audience at the Dancing Cat Saloon. And the man who dreamed up the 1969 festival, promoter Michael Lang, himself made an appearance at the annual Yasgur Road Reunion just down Route 17B.

No deaths related to Woodstock anniversary events were recorded this weekend, and arrests were limited to one domestic-dispute felony, four misdemeanor drug charges, and four violations for trespass and disorderly conduct, according to the State Police. The weather was hot and humid but only occasionally threatening, and the envisioned traffic jams did not materialize.

“We planned for the worst and hoped for the best,” said Sauer. “We got the absolute best!”