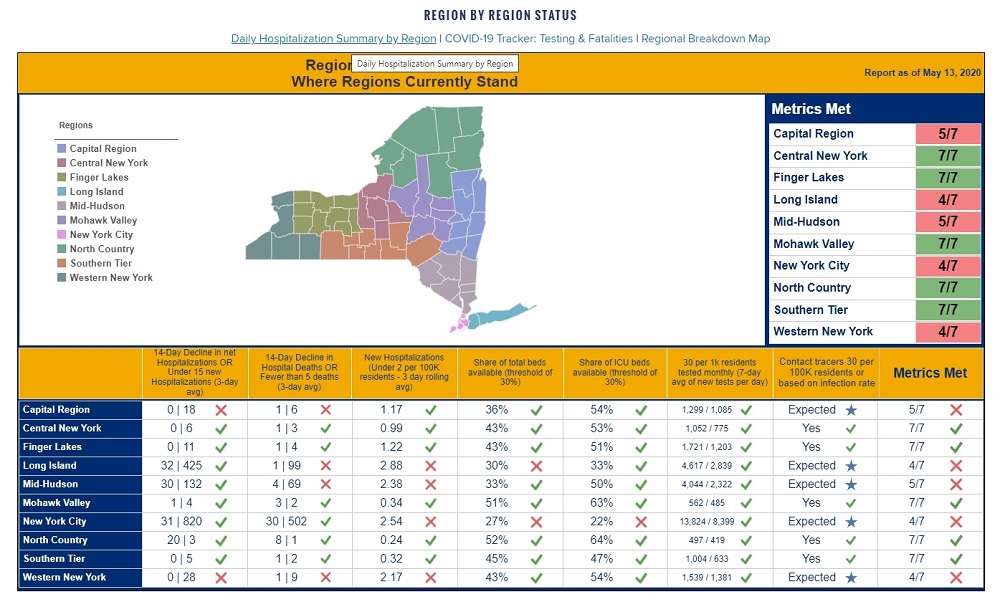 Monticello, NY – Sullivan County Manager Joshua Potosek today affirmed that the Mid-Hudson Region has reached five of the seven metrics the State has set to begin a phased reopening amidst the COVID-19 crisis. Those five metrics are a 14-day decline in hospitalizations, at least 30% of local hospital beds available, at least 30% of local ICU beds available, at least 30 tests per 1,000 residents per month, and a State-approved number of contact tracers.

“There are two metrics we haven’t met,” he explained during today’s Live Town Hall (viewable on the County’s website, sullivanny.us). “One is that new hospitalizations have to be under two individuals per 100,000. The region is at 2.38. The other indicator is a 14-day decline in hospital deaths. As of Wednesday, we were on day four of that decline, so hopefully that continues trending in the right direction.”

Sullivan is in the Mid-Hudson Region, defined by the State to include Orange, Ulster, Dutchess, Putnam, Rockland and Westchester counties. That region remains under the “NY on Pause” restrictions.

“Our figures get rolled up into the region. At some point determined by the State’s metrics, all of the counties in that region will proceed to Phase I of the reopening, even if one or two counties aren’t meeting the full criteria,” Potosek remarked.

The County Manager serves on the Regional Control Board for the Mid-Hudson, comprised of leaders from the aforementioned counties. Through that and other venues, he has expressed to the State the public’s deep desire to know whether State-regulated summer camps will be opening this season.

“The State has acknowledged our concern about opening camps safely. We want them to open safely,” Potosek stated. “But if they cannot open safely, we are hopeful the State will make a decision sooner rather than later, so there is clarity for all of us. In the meantime, we’ll continue to prudently plan for their potential reopening, so that we’re ready if the State decides they can open.”

The State’s reopening map and dashboard are available at https://forward.ny.gov/regional-monitoring-dashboard.