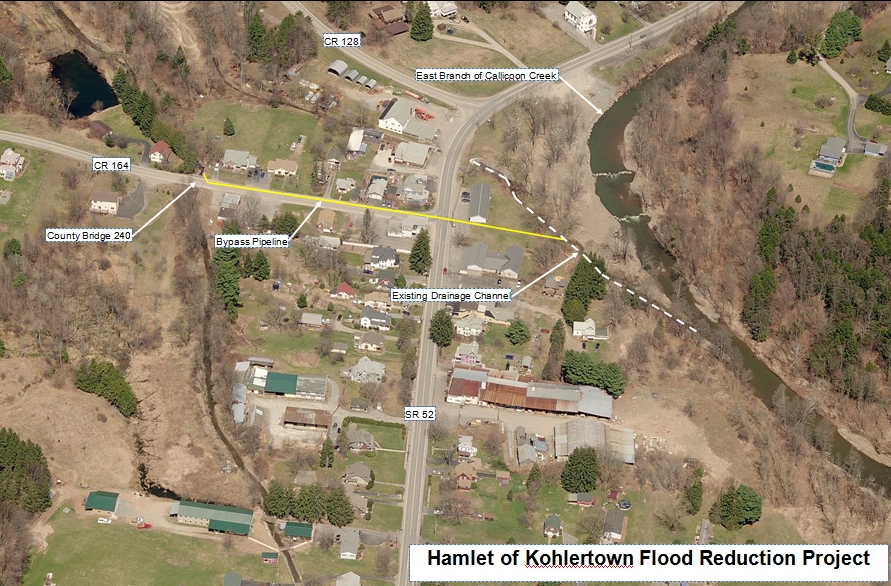 Jeffersonville, NY – The Sullivan County Division of Public Works has initiated a project to reduce flooding along County Route 164/Beechwood Road down to its intersection with State Route 52, as well as behind the homes to the west of Route 52, from the 164/52 intersection to the State bridge located approximately ¼ mile to the south on 52.

This $2,018,168 project has been funded in part by the Climate Smart Community Grant Program, Title 15 of the Environmental Protection Fund through the New York State Department of Environmental Conservation. The project aims to capture the excessive storm flows that currently jump the stream bank at a point approximately 1/10 of a mile west of the 164/52 intersection and convey that water directly to the East Branch of Callicoon Creek via an underground pipeline.

“Residents and businesses in and around Kohlertown have lived long enough under the fear that any storm could rain down mud, rocks and debris on them, damaging their homes and properties,” said District 5 Legislator Terri Ward, who represents the area on the Legislature. “We can do something about that, in a way that benefits everyone without harming the environment.”

“It’s taken some time to put all the pieces together to start this project, and it will take a bit more time to finish it, but those who live in, work in and drive through Kohlertown can rest assured it’s going to get done, through the top-notch skills and dedication of our Division of Public Works and the full support of this Legislature,” stated District 7 Legislator Joe Perrello, chair of the Legislature’s Public Works Committee.

Planning and design work has just begun by the Division of Public Works and will be continuing through 2021. Tentatively, the construction is anticipated during 2022.

Further information can be obtained from Robert Trotta, the County’s Project Manager, at 845-807-0278.