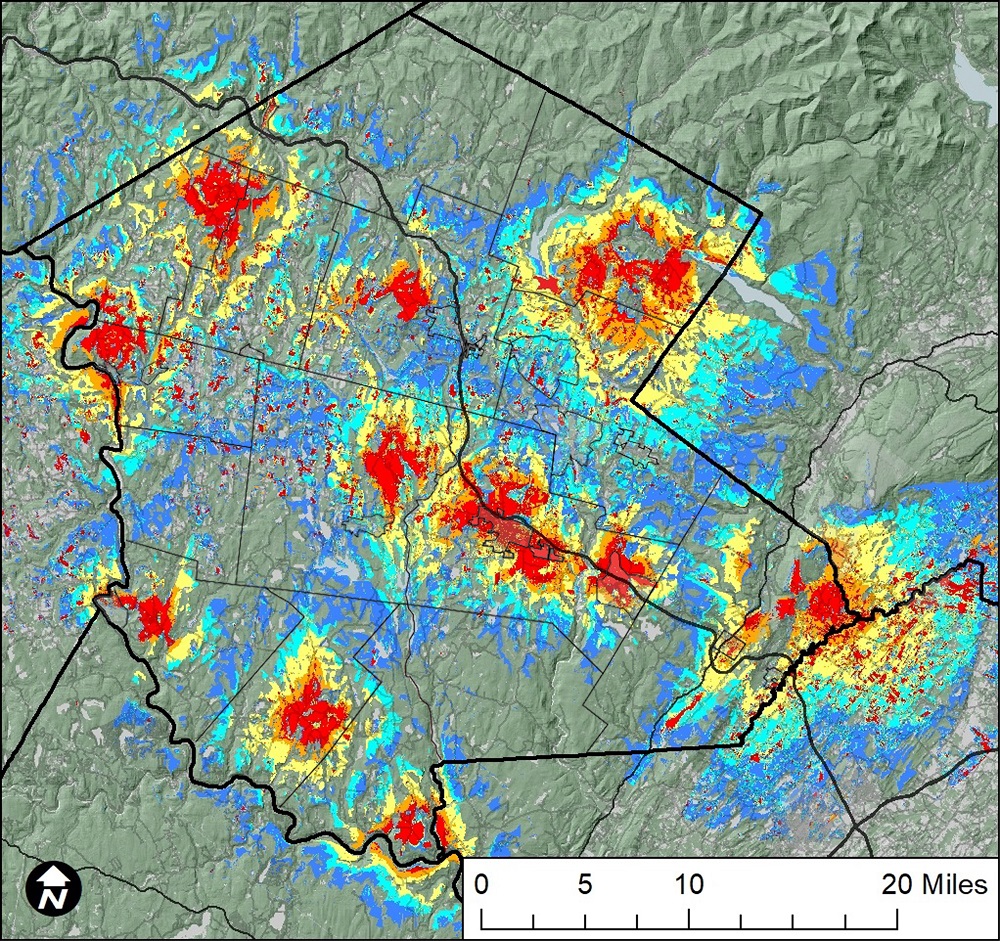 This map from the broadband wireless predictive study shows how much of Sullivan County may initially be able to receive wireless Internet service, based on tower locations. The red and orange areas indicate the strongest signals, but service can be provided in the yellow and blue areas as well.

“We did a broadband wireless predictive study [Countywide],” Information Technology Services Commissioner Lorne Green told the Legislature’s Management & Budget Committee on August 13. “That came up with 44,779 residential customers with potential service, which is really exciting. …We overlaid the business locations in the County and then ran the same analysis… 1,213 of them were covered.”

Cell-based broadcast equipment is proposed to be mounted on a total of 12 towers, 9 of which are County-owned and one of which is privately owned. The remaining two towers are planned to be built by next year. The study took into account the signal reach of each of the towers.

“We’ll be able to broadcast up to 200Mbps service,” Green affirmed, contrasting that with DSL service, which typically offers 6-7 Mbps. “Our biggest challenge is terrain and foliage.”

Legislators, who consider this concept the County’s #1 priority, authorized Green and his staff to launch a pilot project later this year in the Monticello area. Should it prove successful, the County aims to roll out the service across Sullivan, utilizing a mixture of grants and revenue from subscribers to the service. The LDC was created to accomplish such through a five-member board (Green has been appointed, while the Legislature will choose four other members shortly), whose mandate will be to acquire, finance, dispose of, lease and/or license land, towers and broadcast equipment to provide broadband service to underserved and unserved areas of Sullivan County

“Sullivan County has long been of only mild interest to broadband providers,” Legislature Chairman Robert A. Doherty stated. “So we’re stepping in to give the kind of Internet service our residents and businesses have to have. Without it, we will not be able to grow the County, especially in the western end. Broadband wireless offers us a way to provide high speed at low cost, and it will position us very competitively in a world that demands instant connectivity.”