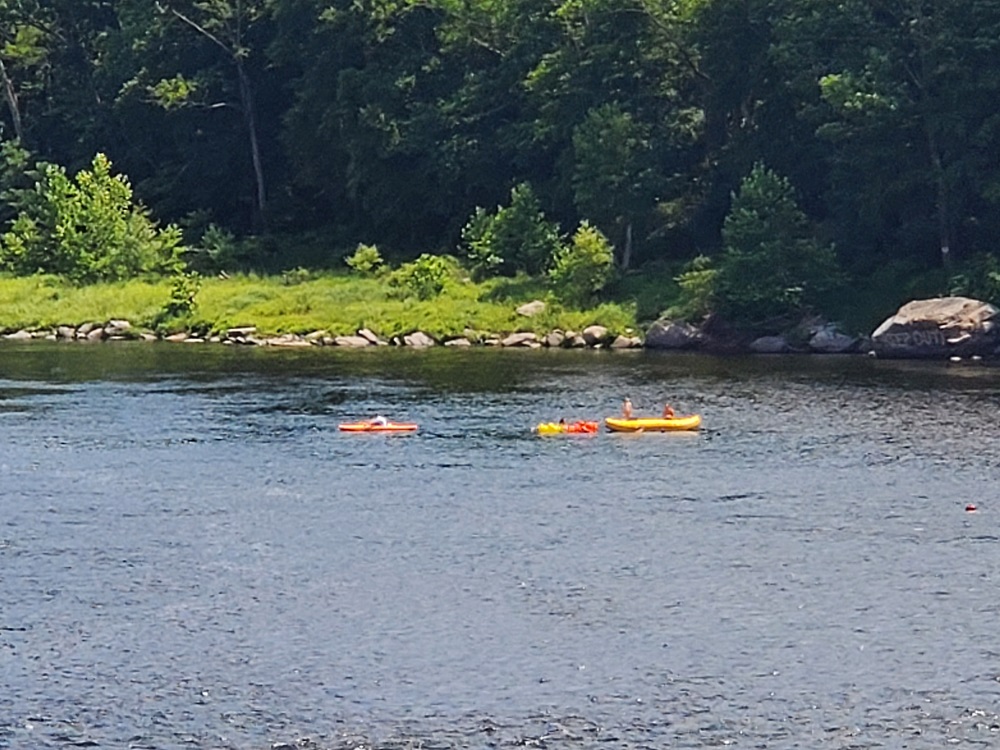 Yulan, NY - The fourth local drowning on the Delaware River in as many days left Town of Highland Supervisor Jeff Haas deeply shaken. He was one of the Yulan firefighters who performed CPR on the 28-year-old victim yesterday evening at a campground near Barryville.

“This river doesn’t play games,” he said. “The recent deaths have been of young, able-bodied people who drowned because they weren't wearing PFDs (Personal Flotation Devices, like lifejackets).”

“This young guy was 40 yards from shore in no more than 10 feet of water,” Haas added. “His brother told me that he was right behind him - and then suddenly he was gone.”

Highland Town Councilwoman Kaitlin Haas was on the river when several of the drownings occurred.

“Not one person that I saw had a lifejacket on,” she noted.

“The canoe and raft liveries properly provide PFD equipment, but not everyone wears them, and people who just go swimming often don’t have them with them,” she explained.

Drownings have happened in the neighboring town, too.

“It has been a tragic past few days in the Town of Lumberland and the river corridor, reinforcing how dangerous the river can be if people don’t follow the safety instructions and use the life jackets provided to them,” expressed Lumberland Town Supervisor Jenny Mellan. “I would like to extend my gratitude to all the men and women of the volunteer fire departments that have spent countless hours on the river, responding to these calls.”

“It’s not a swimming pool,” stated Sullivan County Legislature Chairman Rob Doherty, whose district includes the part of Highland where the latest drowning occurred. “We want everyone to come and enjoy the Delaware, but we also want them to safely get home after they’ve had a great time here. And that means respecting the danger of the river and wearing lifejackets.”

According to the Upper Delaware Council and the National Park Service, approximately 70 drownings have occurred on the Delaware since 1980 - all of them with people who were not wearing PFDs of any kind.

“It’s disappointing that year after year of these tragedies, people still don’t adhere to the clear safety precautions that are explained to them in signage, through the National Park Service, and by the liveries,” acknowledged District 2 Legislator Nadia Rajsz, who represents the Town of Lumberland on the Upper Delaware Council (UDC). “Water is a wonderful recreational venue, but it is dangerous, and you must wear a life preserver, enjoy time on the river with friends, and avoid taking alcohol or drugs before getting in to it.”

Rajsz added that this will be a prime topic at tomorrow’s (Thursday, July 1’s) UDC meeting in Narrowsburg.

“These tragedies are unnecessary and avoidable. If people are wearing lifejackets, this won’t happen,” she remarked. “I very much appreciate everything our EMS and firefighter volunteers do at these scenes and on a daily basis – I just wish they didn’t have to respond in the first place.”

“People have got to take this seriously, and you have to respect the river. Enjoy it, but respect it,” said Supervisor Haas. “The toll it takes on families, friends and our first responders is too high to ignore.”