The Airport was originally developed in the late 1960s to serve the Catskills. 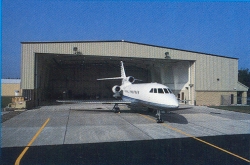 MSV is designed for a Gulfstream IV type of aircraft. This aircraft is a large corporate jet that weighs approximately 74,500 pounds fully loaded and has a wing span of 78 feet. Larger aircraft can also be accommodated by the airport on a reserved basis. The pavement was designed in a manner which will accommodate future strengthening should the need arise to serve larger aircraft on a routine basis.

Airport facilities consist of an 8000 SF Terminal with a restaurant; two 10,000 SF and one 6000 SF conventional hangars and five T-hangars, with the latest being a state-of-the-art, 15 bay T-hangar constructed in January 2003.

Pilots interested in excellent aircraft accommodations may contact James Arnott (Airport Superintendent) at the Sullivan County Government Center in Monticello, N.Y. at 845-807-0326. Space is also available for the construction of new hangars.

Sullivan County Int’l Airport (SCIA) has assumed major FBO functions. SCIA has fueling facility for JET A and 100LL. Call SCIA at 845-807-0325 for after-hours operation and assistance with other Aviation related services.