Fort Delaware Brochure: Inside & Outside

Fort Delaware is an authentic depiction of the life of the Delaware Company Pioneers who settled in the Upper Delaware Valley in 1754. A tour of the facilities includes demonstrations of early settlers' lifestyles and craft-making. A gift shop and picnicking facility are located on the grounds. Each spring, the Fort is host to over 1000 students who participate in the Student Days program. This facility is located within the Upper Delaware Scenic and Recreational River, a unit of the National Park Service.

The Fort is owned, operated and maintained by Sullivan County through its Department of Parks, Recreation and Beautification. 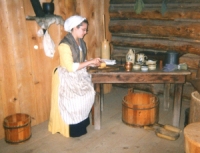 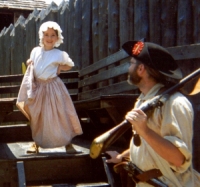 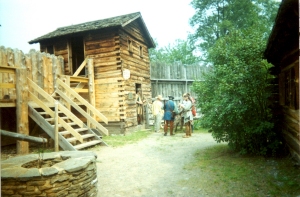 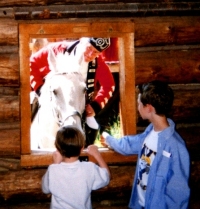 This popular program is held in the spring of each year on weekdays from mid-May through the first week in June. This program allows your students to interact with the 18 th century. Through lively demonstrations of early Colonial life they will see our blacksmith hard at work over his forge, our spinners, weavers and barn loomers will be busy at their craft, and our candle maker and quilter are always ready to show off their skills to the children. The students will enjoy special demonstrations by our “Wilderness Man” and enjoy sing-a-longs with our staff along with firing of muskets. The students will explore our log cabins and discover the life of a trapper, a logger and life skills of a Colonial family in the 18th century.

The Fort’s Gift shop features a full line of gifts and souvenirs for your students to remember their visit to Fort Delaware. For schools wishing to bring a large group (150 or more) you may reserve an exclusive day at the Fort. For reservations please call (beginning in January) (845) 807-0287.

Advanced reservations are required. The cost is $3.00 per student and $5.00 per adult. One chaperon is admitted free with every 10 paid. We have ample parking for buses and provide a picnic pavilion to groups at no additional charge. Permanent bathrooms are available at the site. We accept credit cards, cash and personal checks in our gift shop and there are two ATM machines located within a short walking distance from the fort. Fort Delaware is located on Route 97 in Narrowsburg, NY and is approximately 45 minutes north of Port Jervis and 30 minutes west of Monticello.