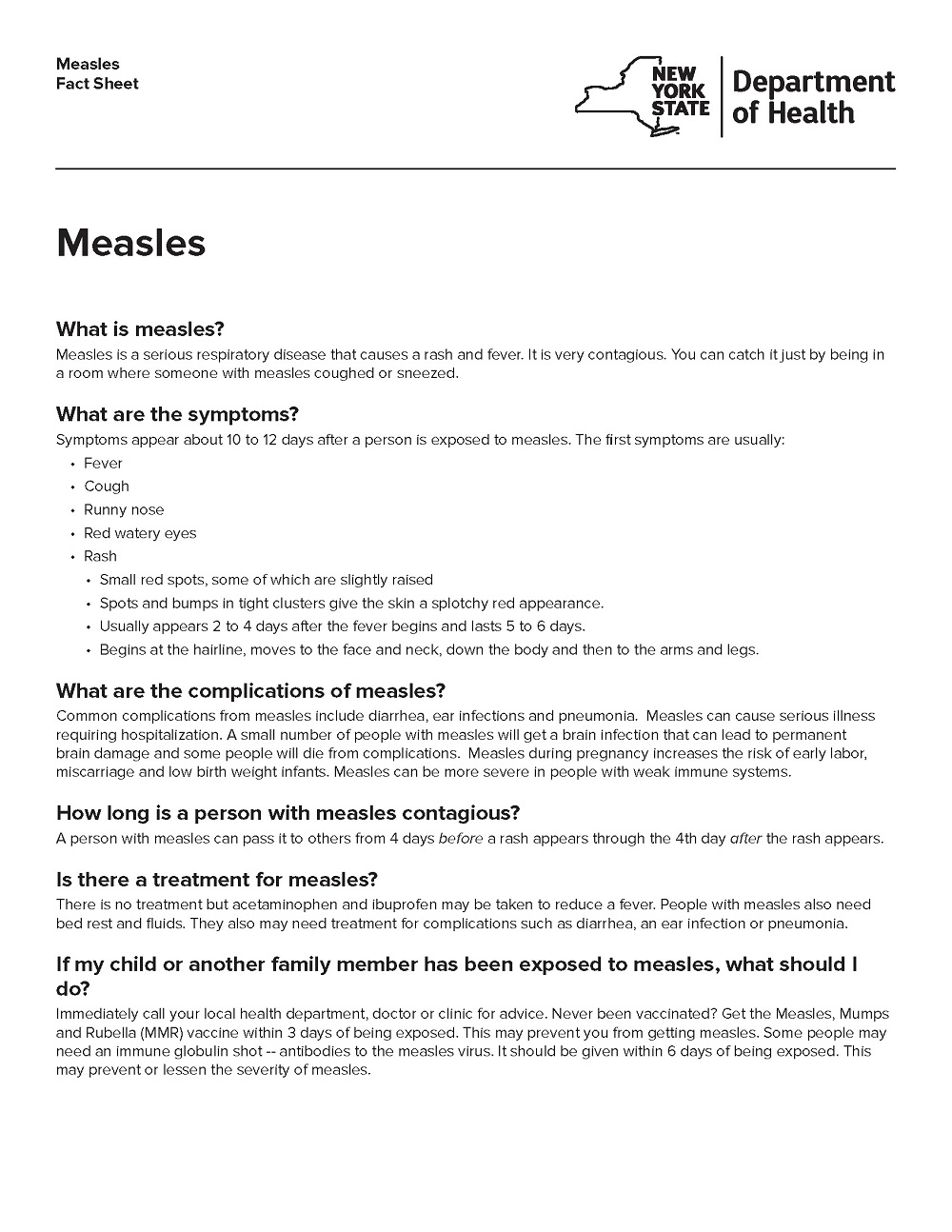 •           The individuals are considered to have been contagious from March 4, 2019 to March 12, 2019. They resided during this time primarily in Sullivan County but did spend time in and travel to Brooklyn, where there is an ongoing measles outbreak.

•           Both Sullivan County and the NYC Health Department, in conjunction with the NYS Department of Health (NYSDOH), are working to contact those suspected of having been exposed during this contagious period.

•           There are no known exposures to Sullivan County residents at this time.

Individuals are not at risk of contracting measles if they are immune. A person is unlikely to get measles if they were born before January 1, 1957, have received two doses of the MMR (Measles, Mumps and Rubella) vaccine or have a lab test confirming immunity.

Those individuals lacking immunity, or not sure if they have been vaccinated, should contact their healthcare provider if they develop measles symptoms: a fever, rash, cough, conjunctivitis or runny nose. Symptoms usually appear 10-12 days after exposure.

To prevent the spread of illness, the NYSDOH is advising individuals who may have been exposed and who have symptoms consistent with measles to contact their health care provider or a local emergency department before going for care. This will help to prevent others at these facilities from being exposed to the illness.

Measles is a highly contagious respiratory disease caused by a virus that is spread by direct contact with nasal or throat secretions of infected people. Symptoms generally appear in two stages.

In the first stage, which lasts two to four days, the individual may have a runny nose, cough and a slight fever. Eyes may become reddened and sensitive to light while the fever gradually rises each day, often peaking as high as 103° to 105° F. Small bluish white spots surrounded by a reddish area may also appear on the inside of the mouth.

The second stage begins on the third to seventh day and consists of a red blotchy rash lasting five to six days. The rash usually begins on the face and then spreads downward and outward, reaching the hands and feet. The rash fades in the same order that it appeared, from head to extremities. A person can spread measles from 4 days before the onset of rash through 4 days after the rash begins. Although measles is usually considered a childhood disease, it can be contracted at any age.

The single best way to prevent measles is to be vaccinated. Individuals should receive 2 doses of MMR vaccine to be protected. If a person is unsure if they are immune, they should contact their healthcare provider. The first dose should be given at 12-15 months of age and the second dose should be given at 4 to 6 years of age (age of school entry).

In New York State, measles immunization is required of children enrolled in schools, daycare, and pre-kindergarten. Since August 1990, college students have also been required to demonstrate immunity against measles.

Sullivan County Public Health Services has sent an advisory to area health care providers about the measles exposure. Providers should report all suspected cases of measles to Public Health at 845-292-5910.

More information about measles can be found at www.health.ny.gov/publications/2170.